These days I speak a lot about how to talk to and be with those who are living with cancer and other awful things. In those presentations people often ask, “What was it that people did for you during the toughest times that you appreciated the most?” We talk about how many of us say, “Let us know what we can do,” even as we are aware can be extra burden to a person who’s likely overwhelmed already.

During that first awful February, I had no answer to those who asked what they could do for me.   was deep in the valley of the shadow, and had no idea how to find a way out. When you’re in the midst of the badness, it’s hard to figure out what others might be able to do for you. 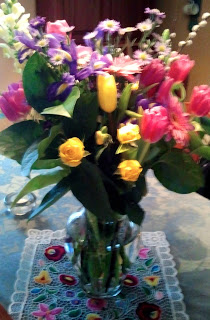 So today, when I talk with others about how to be helpful to those who are suffering, I talk about how appreciative I have been of those who saw a need and filled it. One of my daughter’s friend’s mothers is a hair stylist, and during the time I was homebound, she came to the house and cut my hair.  Another friend asked for recipes of our regular family dinners so she could bring meals that had an added sense of comfort to them.

On the less-practical-yet-still-wonderful hand, a dear friend of ours who lost his wife to the same cancer I have has created a beautiful tradition in response to my allergic reaction to the second month of the year. The first day of February he shows up at our house with flowers. Not just a few small buds, but a dazzling array of Gebera daisies, lilies, and roses.  February’s threat fades in the presence of their beauty.

Last week, as February breathed its last breaths, another gift of flowers arrived, this time from a dear friend in Illinois who has kept a steady stream of gifts coming our way the past four years. For a good while it was blueberries—preserved, dried, mixed with amaretto, drenched in chocolate.  Lately she’s moved on to sunflowers—this time, with irises. Once again, the sight and smell of fresh-cut flowers has taken the edge off this time when the valley of the shadow lurks near by.

I’ve said many times before that cancer is no gift. At the same time, countless gifts of grace have come my way in cancer’s wake. I—we—are often held up by these signs of grace, hope, and love bestowed on us by those who care for us.  In the longest shortest month of the year, flowers testify that spring is on its way.  In this season of Lent, flowers stand as silent witnesses that Easter is coming. Winter is fading. New life is almost here. Thanks be to God—it’s March.