When I was diagnosed with stage IV cancer, I started preparing to die. Granted, we should all “live like we’re dying” as singer Kris Allen reminds us, but an aggressive diagnosis ups the urgency on doing just that.  I went back to teaching even though I could barely stand up because I wanted to be in the classroom one last time. I stopped buying new clothes because I didn’t think I’d have much time to wear them.  I insisted on a summer vacation even though my stamina was shaky because I thought that would be the last one I’d take with the family. My husband and I secured burial plots. There didn’t seem to be much time, and I was intentional in my preparations for the end.

Then I went into remission. Having already resigned from my life, I gradually let myself believe that there could be another semester in the classroom, that if I bought new clothes I’d have some time to wear them, that I might get to experience another family vacation.  What an amazing turn of events.  Thank God, thank the doctors, thank the world for allowing me more time.

END_OF_DOCUMENT_TOKEN_TO_BE_REPLACED 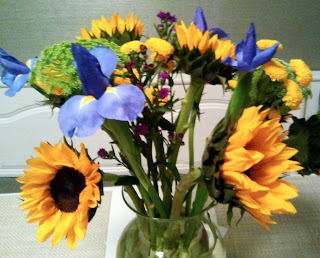 END_OF_DOCUMENT_TOKEN_TO_BE_REPLACED

A Most Amazing Gift

Almost exactly three years ago I was given a most amazing gift.  On an exquisite fall day, my family and I were lured to a friend’s home and given a quilt sewn together by dozens of friends and family members.  Over the past 3 ½ years, we’ve been overwhelmed by many meaningful gifts bestowed on us in response to my illness.  But this one takes the cake. 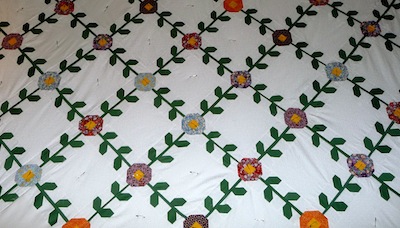 The friend who came up with the idea of a quilt told us that back when I was at my sickest, she had a vision of creating a quilt for us.  She considered this vision her marching orders and used the entries on my Caring Bridge site to make contact with our friends and family about participating in making a quilt.

Mailing fabric, dropping off squares at various locations, even meeting prospective sewers clandestinely in coffee shops, our friend recruited a small army of sewers to help make her vision a reality.

During the summer I moved into remission, sewers sent completed squares back to our friend. A quilting frame went up in her living room, and unbeknownst to us, her family hosted quilting nights where our friends and family gathered to stitch this quilt together.

On that gorgeous fall day three years ago, our family was rendered speechless by this gift and the deep love radiating from our dear friends and family who had gathered to stitch it together for us.

END_OF_DOCUMENT_TOKEN_TO_BE_REPLACED

Recently I was interviewed for a radio show on what it’s like to live with—and talk about living with—cancer.  The interviewer asked thoughtful questions, including one I hadn’t heard before.  The interviewer set up her question with a reference to a friend of hers who doesn’t want others to know that she has cancer because she doesn’t want to be treated differently, like she’s some breakable object.  The interviewer then confessed to wanting to treat me “gently” during our interview, which led to her question: what’s my take on being viewed as fragile because I have cancer?

It doesn’t take much effort to figure out that I’ve opted for a more public approach to living with cancer rather than a keeping-quiet-about-it approach.  I’ve thought a lot about the dynamics of going public with my condition; even so, the interviewer’s question was a bit startling.  No one has framed the issue for me in quite that way: that when we’re public about our illness or our suffering others will treat us differently, and that is something we might want to avoid.

I can see where the interviewer’s friend fears being treated differently.  We pride ourselves on being independent and in control of our lives; cancer wreaks havoc on all of that.  Being out there about our diagnosis and our struggles often makes it plain to others that we’re neither independent nor in control.  It makes sense that we’re reticent to make that reality public.

END_OF_DOCUMENT_TOKEN_TO_BE_REPLACED

Having Cancer in a Digital Age

Not many years ago, I had a dim view of the Internet’s ability to create cultures of anything productive. Living and working with others constantly connected to—and distracted by—digital tools left me skeptical that any new relational depth was being plumbed through our wired lives.  I didn’t even have a cell phone until last year and was quick to judge others who ignored their children to carry on conversations in public on their phones.

Then I got sick.  Really sick.  In a matter of months, I went from being a healthy forty-one-year-old religion professor, wife, and mother to a virtual invalid with a broken back, a stage IV cancer diagnosis, and a grim prognosis for the future.

To keep family and friends updated during the early days following the diagnosis, my brother created a Caring Bridge site for me, a website dedicated to connecting people with serious illnesses with those who care about them.  News of my diagnosis spread quickly; just as quickly loved ones, friends, and eventually even strangers signed up to receive my Caring Bridge updates.  From my narration of what stage IV cancer had done to my body to sharing the grief of having to resign from my very full and wonderful life, each of my posts was met with dozens of responses on the Caring Bridge site, as well as emails, cards, packages, visits and calls from people from all corners of my life.  It was startling to realize that through our connectedness via Caring Bridge I was being surrounded by a cloud of witnesses greater than any I could have previously imagined.

END_OF_DOCUMENT_TOKEN_TO_BE_REPLACED

The Still More of Alice

This summer my aunt sent me a copy of Lisa Genova’s Still Alice, a novel about a 50-year-old Harvard professor diagnosed with early onset Alzheimer’s. Scanning the back cover my eyes rested on the phrases “searing spotlight” and “dread disease,” tempting me to set the book on the bookshelf unread.  My own dread disease of stage IV cancer already dominates much of the landscape in my life—why devote precious summer hours to another tale of grief?  Breezy novels about beaches and sunsets seemed a more attractive option.

But the book was a gift, so I decided to give it a few pages.  It didn’t take long to be drawn in to Genova’s chronicling of the cracks in Alice’s wonderful life.  A thriving professional woman at the height of her career, Alice’s life was rich with things we in academia covet: smart students, speaking engagements in lovely locales, always-engaging campus environment.  Amidst the loveliness of her life, the forgetting begins slowly, almost undetectably, building to a silent roar that only Alice can hear.  She initially hides her diagnosis from everyone in her life, hoping that if she doesn’t say the words “early onset Alzheimer’s” out loud she can prevent the disease from taking control.  But take control it does, and the rest of this first-person narrative walks the reader down the treacherous path that Alice must take as her life becomes increasingly dictated by the disease.